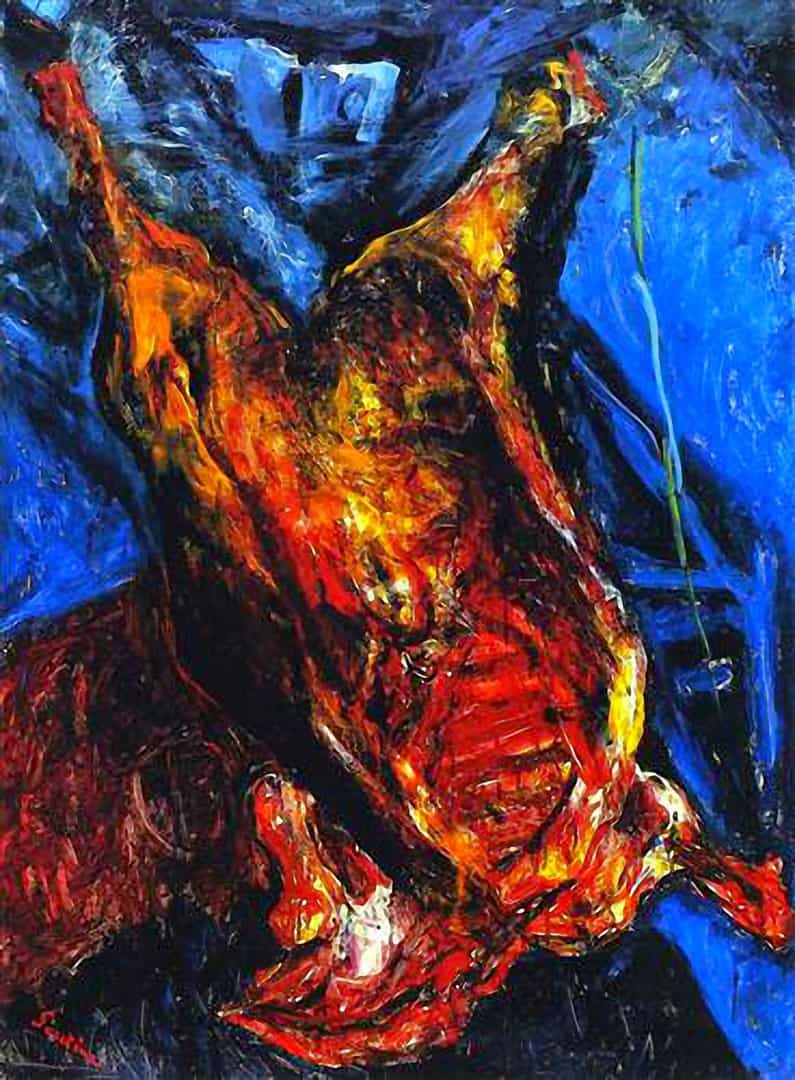 Ok, the title is a bit strange and mysterious but it’s not a “clickbait”. I want to talk about something new and interesting: the representation of slaughterhouse in paintings and street photography (reportage). Before starting I’ll say you a couple of things. First of all I’m not vegetarian. Second, these are only my ideas about works made by other people in painting and street photography, not my personal opinions. I’m interested how different artists approach this particular theme, my opinions are not important this time. I like the way painters and photographers represent the same subject trying “to humanize flayed carcasses“. Some paintings have even religious interpretations. Images are visually strong; obviously violence, death and warm colors, as red, are predominant. We can find a lot of examples both in painting and photography  but I’ve posted here only few works by great masters. Each one has his personal style and point of view in front of a flayed beast. So why talking about slaughterhouse in painting and street photography? Because I like the parallelism between this two arts and also the fact that you can “read” these images using allegorical interpretations: the comparison with human beings and Christ’s suffering is what I really care.

Let’s start with a masterpiece by Rembrandt and his painting The flayed ox (or slaughtered ox), an oil on beech panel  dated 1655. 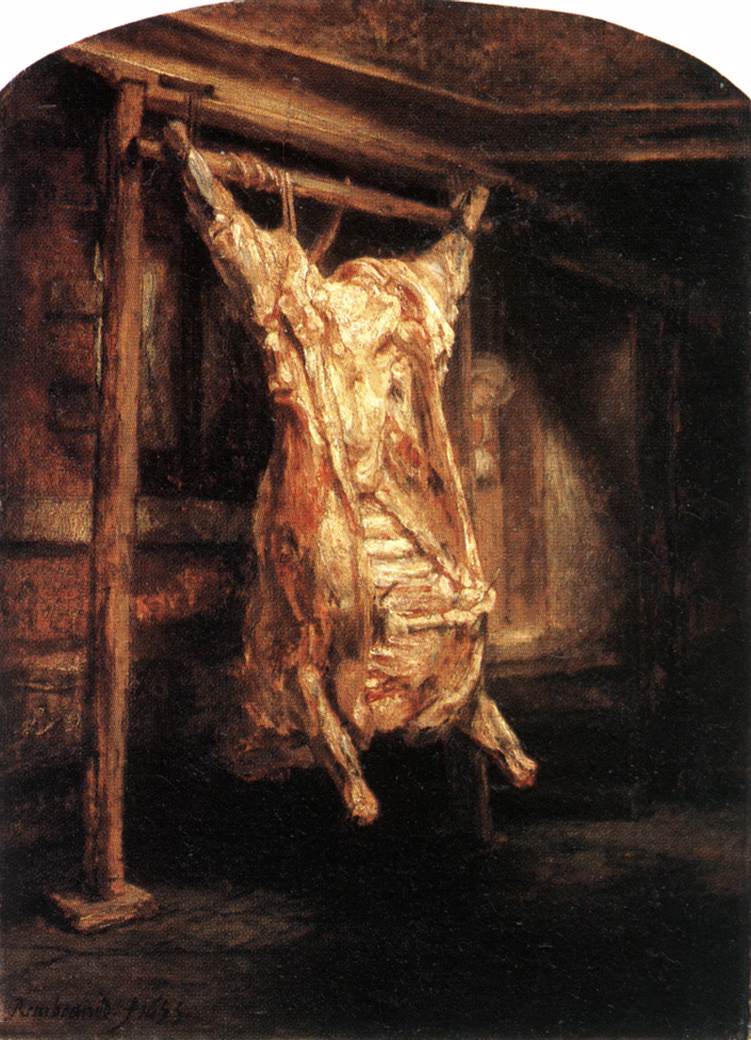 The scene is cruel and dramatic at the same time: the ox is flayed, red blood is still visible over the meat, warm colors are predominant. This body without life has the power to catch and shock our eyes. I can ear the silence in the room, the silence of death. A woman in the background is probably looking at us. The wonderful light painted by Rembrandt gives a sort of soul and spirituality to this ox’s dead body. We can’t see the source of this light (as usual in Rembrandt’s works), maybe is the carcass itself? The background is mostly dark and creates a wonderful chiaroscuro.

I was really impressed by this subject so I tried to give a personal explanation and to find answers to my curiosity on the web. Of course there are a lot of different interpretations but the most recurrent, and also preferred by me, is the following one: the flayed ox is like a secular crucifixion. Slaughtered ox is a religious painting, an allegory of Christ’s crucifixion. Some art historians try also to interprete this work of art with the parable of Prodigal Son: the sacrifice of a beast for the return of son. While Vincent Van Gogh interpreted this painting using a symbolist key: it is an artist’s portrait made of sacrifice, labor, suffering and salvation. Personally I agree with the hypothesis of crucifixion, in such way I feel a similar pity and drama. Light is the vital and spiritual element of this still life.

The slaughtered ox by Rembrandt impressed also a russian painter, Chaïm Soutine. He tried to reproduce this subject with four personal versions.

It was 1925 when Soutine painted this masterpiece inspired by Rembrandt’s slaughtered ox in Louvre. Soutine tries to shock with bright colors and violent brush strokes. In fact this painting has a great visual impact given by the red and and by the strong contrast between warm and cold colors (something similar to Chagall’s style). There isn’t perspective, image is flat and more graphics than Rembrandt’s one. Soutine painted in front of a real carcass sprinkled continuously with fresh blood. Red blood is the most important and strong element of this canvas. He put more violence than Rembrandt, his style is more impulsive and exciting probably because he was an expressionist (like Van Gogh and Munch). While in Slaughtered ox by Rembrandt I can hear the silence of the death watching this version by Soutine I feel cruelty, a sort of scream of pain, more pathos.

Here is a version painted by Mark Chagall. 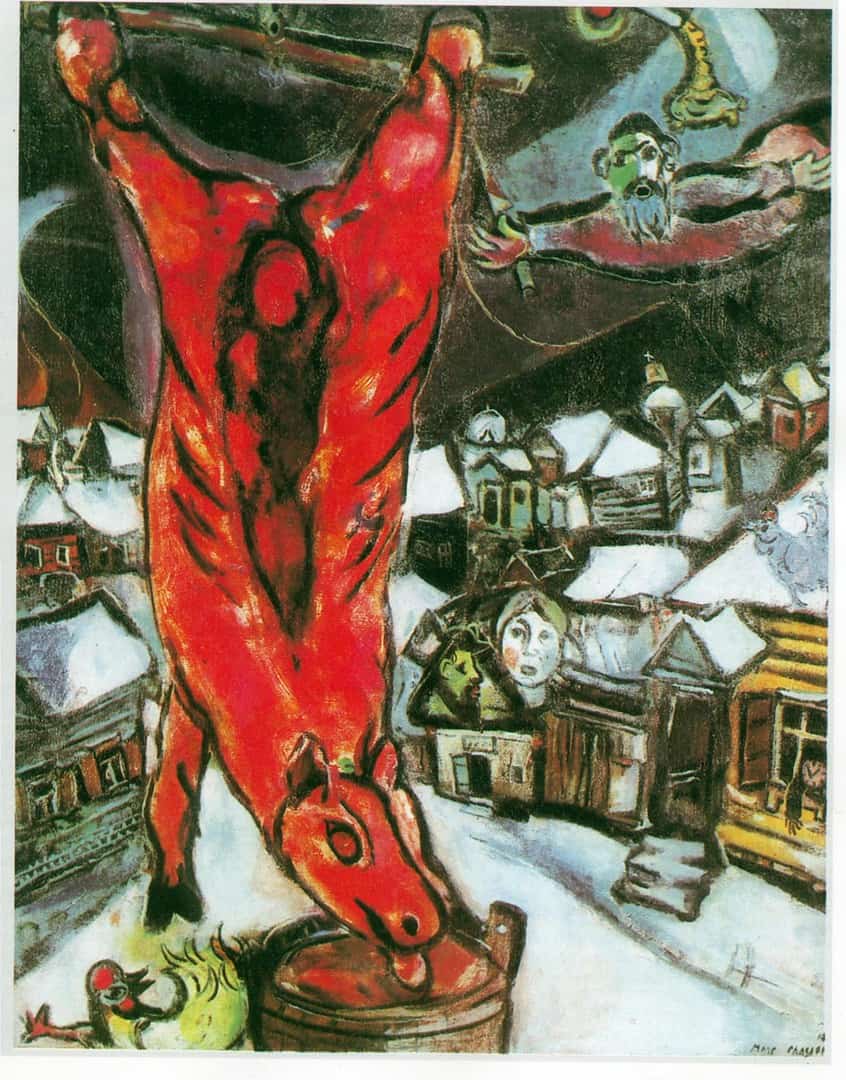 Changing art and looking to street photography (reportage) I have something special to show. A series of pictures taken by an italian photographer whose name is Tommaso Ausili. He took photos of a slaughterhouse in Umbria (Italy) and won the third place as reportage in WorldPress Photo contest 2010 edition. I’ve post here few photos of the whole series. Before reading below you have to know that following images are visually strong and violent.

First shot is my favorite one. I like the perspective and the curtain effect, it seems an horror theatre. There is a deafining silence with two dead skinned sheep in the background. What about the three sheep still alive in foreground? Are they scaried? It looks like they are thinking like human beings about their sad fate. This implicit humanization is what I like most about this picture: I’m pretending that sheep are really thinking about their fate or probably they are sad for the dead of other animals. Rarely you can see a photo with this power.

Other pictures of the series, caution images really really strong… 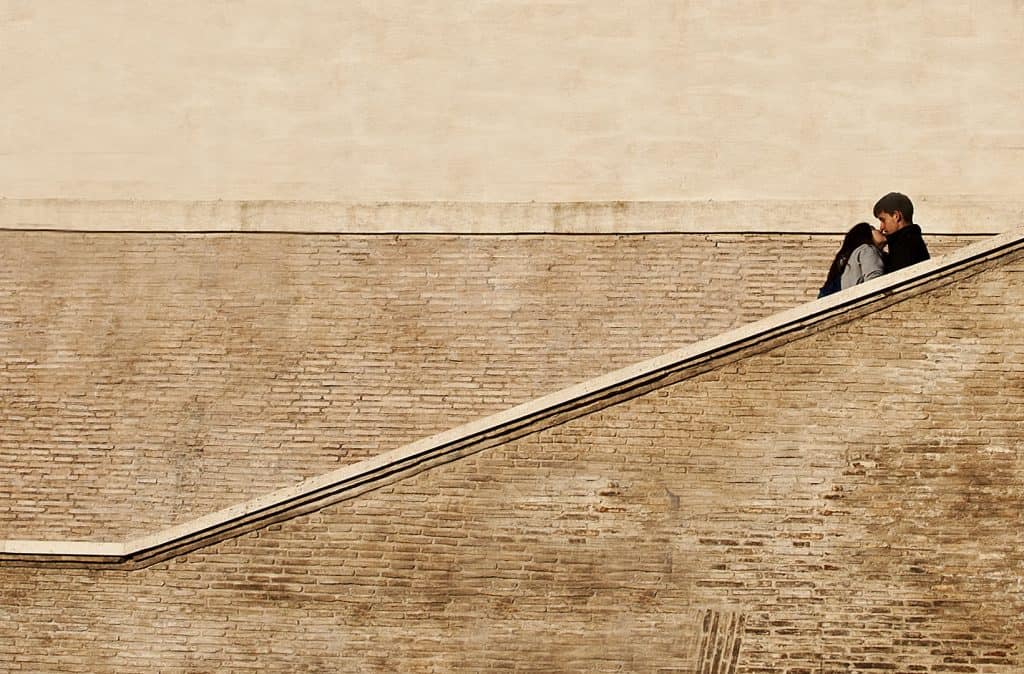 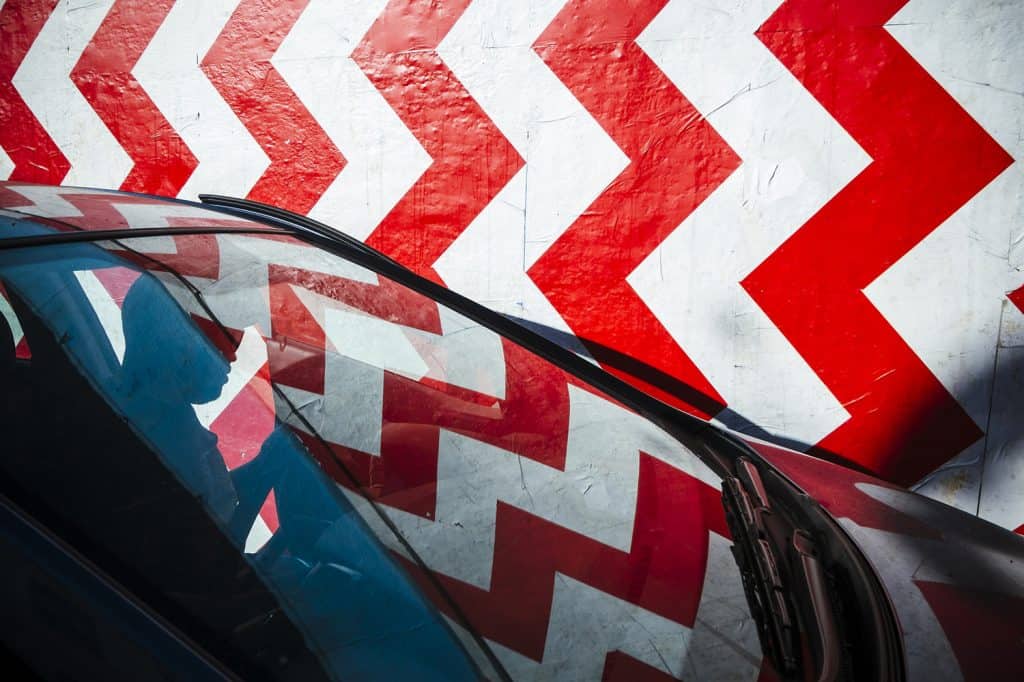 Next post Street photography: evolution in the last decade