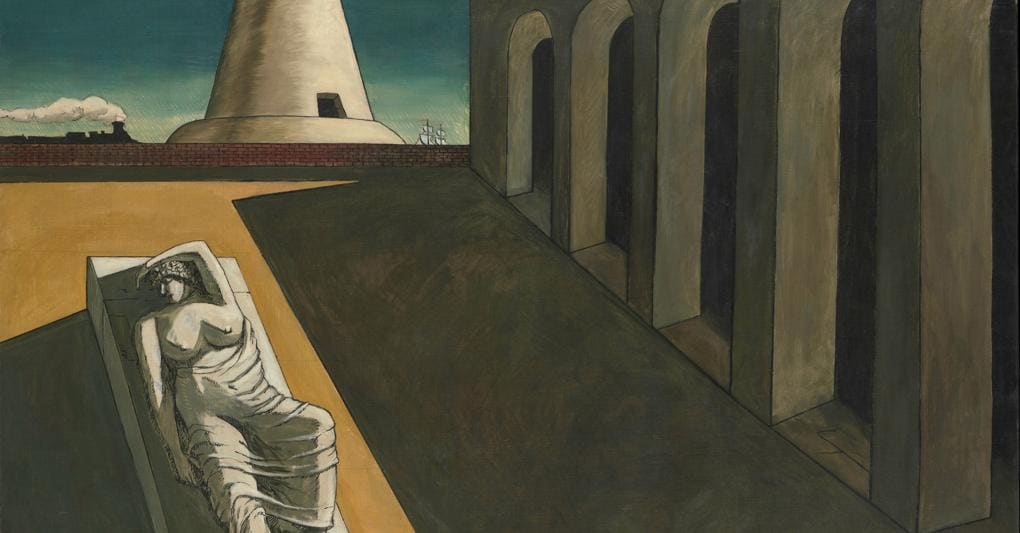 In the previous articles (part 1 and part 2) I’ve introduced De Chirico as painter and founder of the artistic movement of metaphysics. I’ve talked about composition and architectures in his paintings. I’d like to continue this analysis and parallelism between Giorgio De Chirico’s art and photography in this third part about lights/shadows, style, color palette and mood/emotion.

Well, this is one of the most important aspect in De Chirico’s paintings: the use of lights and shadows. He painted mysterious and bizarre scenes at the same time and the way he used lights and shadows is essential. Paintings are usually set in big deserted squares. Looking at lights and shadows we can say that probably it’s late afternoon, melancholy hours before the end of the day. Shadows are often oriented in different directions, but how is it possible? That is how Giorgio De Chirico creates a bizarre sensation of strangeness and unreality at the same time. Long shadows and warm lights help to create drama, anxiety and mystery: this is important for the emotions we feel when we look at De Chirico’s paintings. Nothing is by chance. 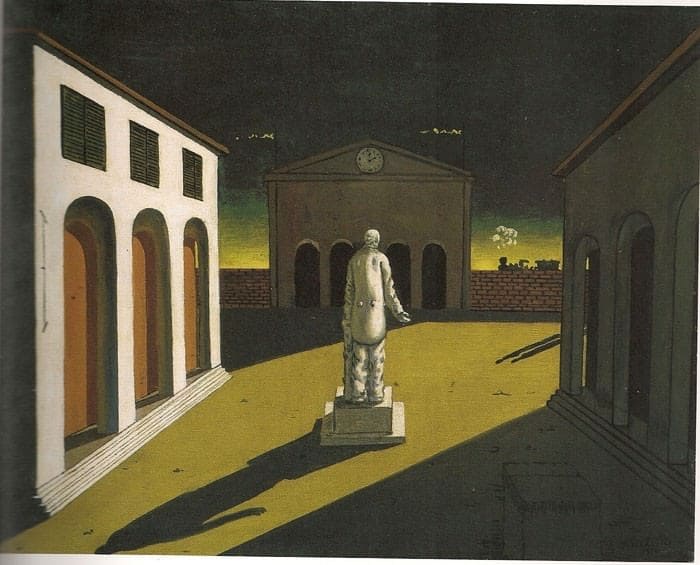 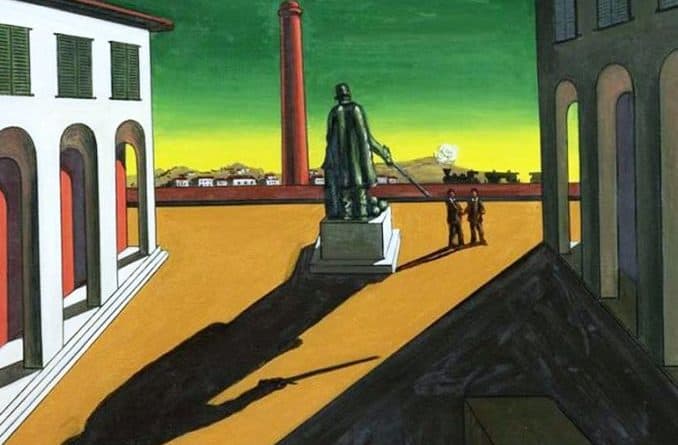 In such way it is the same also for photography and cinema: different types of lights and shadows help to create different feelings in a particular scene. Light is the main storyteller in pictures and it is important also to express emotions. With colors probably you have something more but it works well also in black and white. Scenes change totally in different light conditions. I’ve posted here different photos taken in late afternoon/early morning by great Magnum masters.

The first one is an iconic and famous image taken in India by the legendary photographer Steve McCurry. This is an example how light can give something more to a particular scene. Look the warm colors, the contrast and the beautiful long shadows directing outside the frame. This picture reminds me De Chirico’s canvas. Now try to think at the same scene but taken in midday with a totally different lighting: it changes totally the image and his emotional charge.

The dramatic and selective light in Trent Parke‘s photo (below) is important for the description of the picture. Light creates contrast with shadows and it brings out main subjects. We can’t see colors in this bw pictures but looking at the scene we can say that probably it is early morning or late afternoon. “Closed shadows” and “highlights” give more drama.

This is how the great David Alan Harvey use lights/shadows in his works.

I’ve posted the following picture for almost three reasons. First of all for the use of warm and cold colors like in some De Chirico’s paintings. Second, for the late afternoon light (sunset). Third for the mysterious shadow entering the scene. Like in many De Chirico’s masterpieces also in this picture we don’t know whose shadow this is, maybe the photographer himself? A shadow enters the scene, the boy is looking at it; it creates mystery and anxiety.

When I say “mood” I mean essentially emotions and feelings. As I said before lights and shadows are essential to create a particular mood. Looking at De Chirico’s early paintings we may feel melancholy, anguish, a sense of bizarre and mystery. Early works concern various themes as life meaning, infinity, death, passing of time, memory of the dead father. Besides compositions and elements, colors help him to express a particular emotion. For example he used green for the melancholy, yellow/red tones for anguish. Shadows and statues create mystery while shadows in differente directions create a bizarre and strange sensation.

In early metaphysical paintings melancholy is probably the main emotion. De Chirico reflects about life/death, passing of time and personal things happened in his life like the distant homeland, the death of father and so on… Part of this first series is anchored to the myth of Arianna, inspired by Nietzsche (the abandoned Arianna, melancholy and solitude). Squares are mostly deserted, a person back turned is meditating and looking at his shadow (same for the statues). We feel solitude, sadness, melancholy but also loss. Figures, composition, lights/shadows, colors create these feelings. 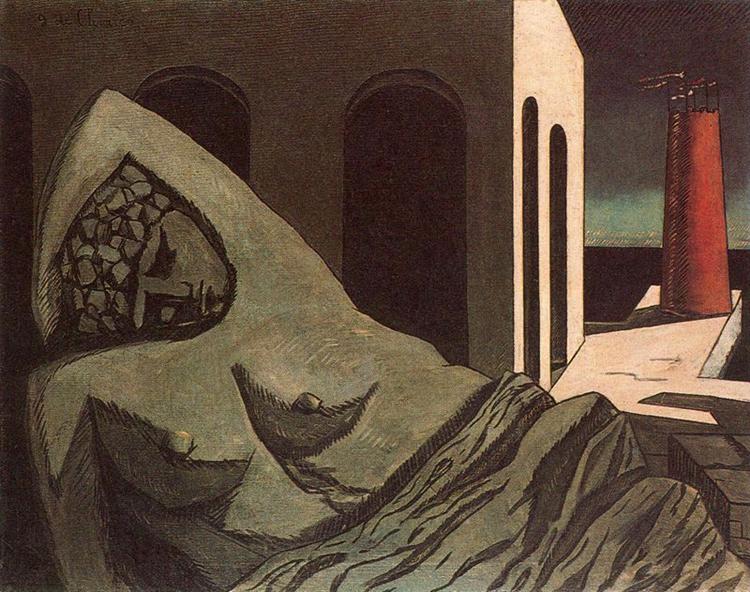 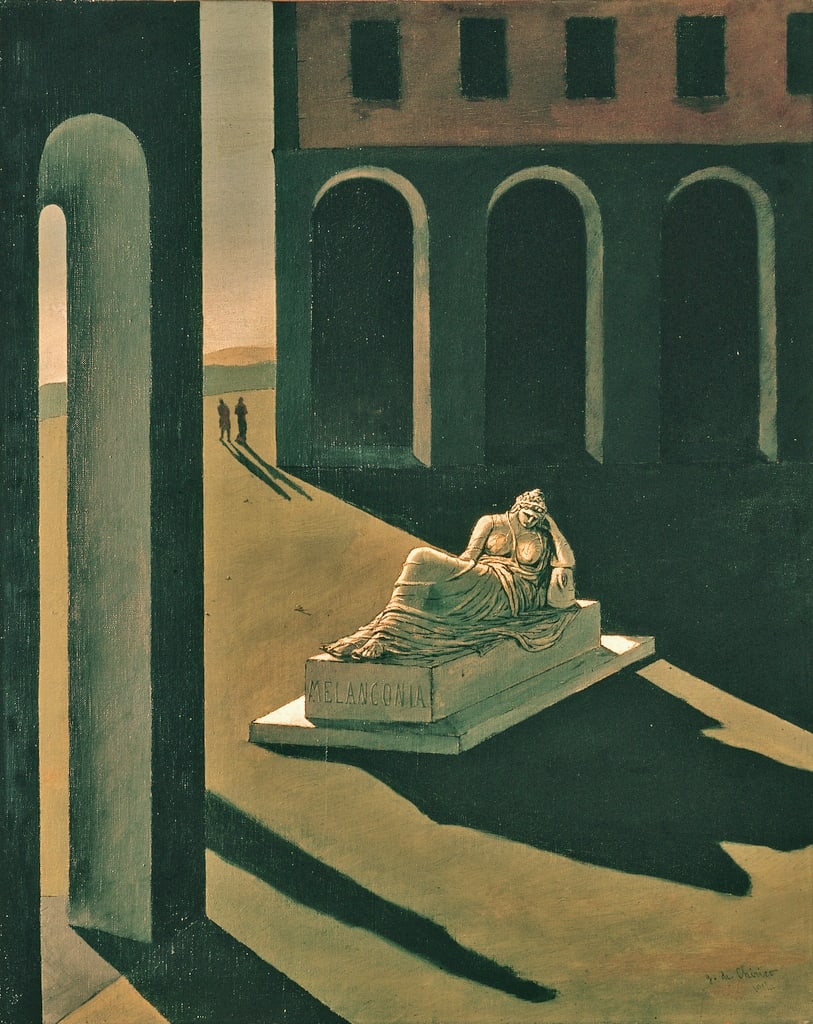 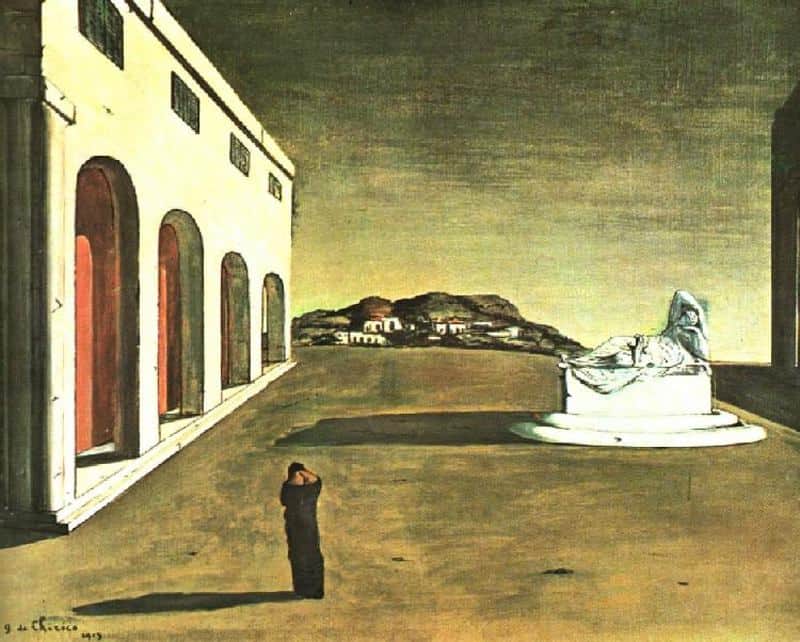 In a second series of the early methaphysical period De Chirico started to paint anguished scenes. Color palette is now characterized by warm dominants (red/yellow/Terra di Siena…). Again he was inspired by facts happening in his life; death become one of the main theme. Thanks to his style he can express his anguish and anxiety. In the following masterpiece the locomotive off represents his dead father (he was a railroader). Shadow entering the architecture is probably his soul; it comes out in the background (the little red trapezium) going to the infinity of the sky. The wall in background represents always the border of the visible and material world. 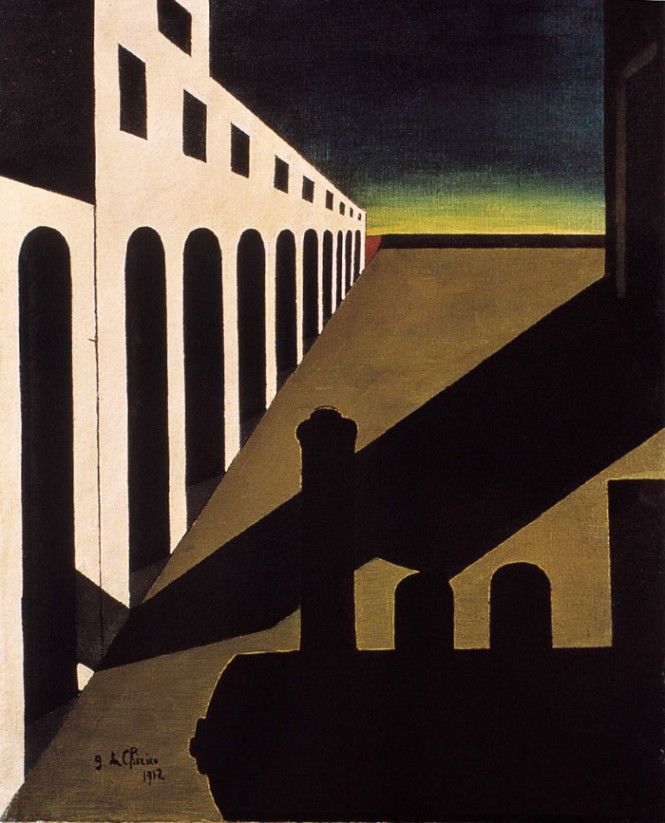 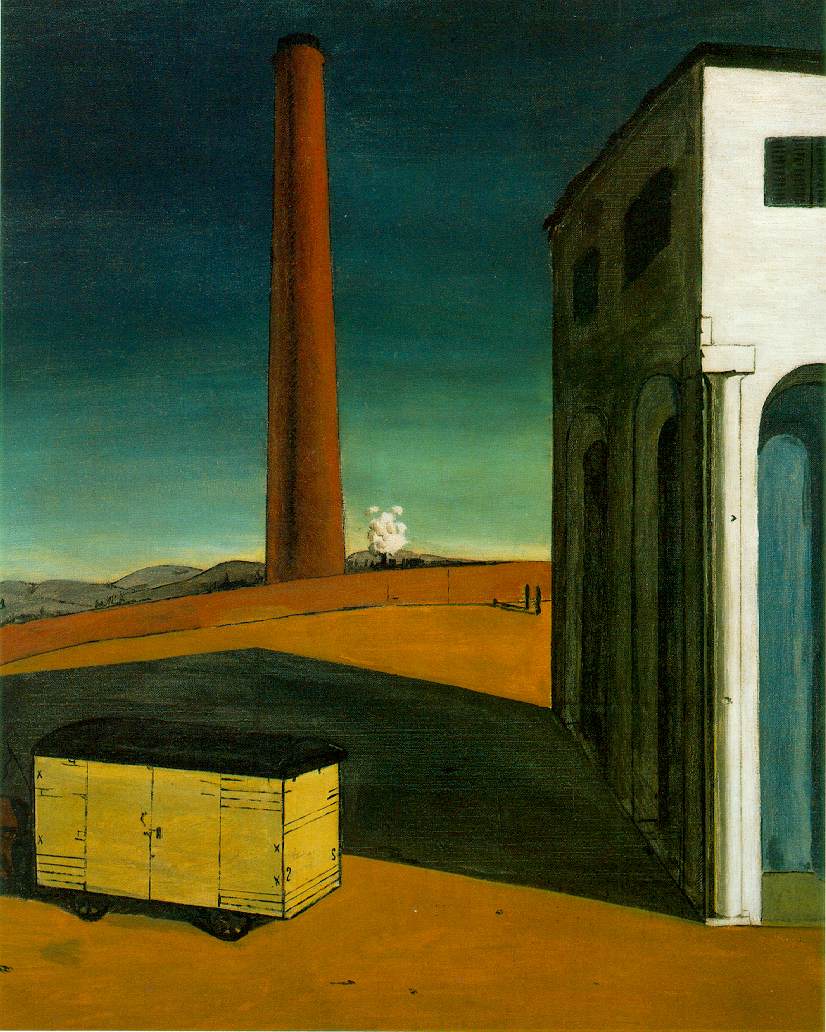 Giorgio De Chirico’s canvas have a particular and personal style. This is important because when I look at one of his paintings I can say for sure “This is a De Chirico’s work!”. In my opinion an artist must have a personal style. Style is not only about composition but also about contents and emotions. Style it the artist’s voice, his point of view about life. So it’s important for you to find something personal and unique also in your photography. When i think to Elliot Erwitt’s photos for example i have in mind love, children, dogs and funny moments. Daido Moriyama reflects his personal story in his gritty and scratchy contrasted black and white; Moriyama’s pictures are strong and raw, they are like a punch in the stomach. Bruce Gilden is famous for his candid shots taken with flash. Personally I find a parallelism between Joseph Koudelka’s Exiles, a melancholy book about the photograher’s exile, and Giorgio De Chirico’s early paintings. Also in Koudelka’s photos there is mystery with people with back turned, anguish and sadness, sometimes long shadows and late afternoon lights; like De Chirico he often composed scenes using triangles. Both Koudelka and De Chirico lived far from their homelands.

As i said in the first article De Chirico’s paintings, technically awesome, have a strong visual impact. One of the most important aspect is probably the way he put together warm/cold colors and complementaries. Usually he used green veronese shaded with blu Prussia for the sky, yellow/yellow ocher for light, red for towers and wall in the background. He used also Terra di siena, the color of the earth, and the two “extremes of light”, black and white. Thanks to color De Chirico convey his mood and feelings; as we said green is for melancholy, yellow for anguish. Here is an example, how he put together warm and cold colors, complementaries and also the extremes of light: black and white. 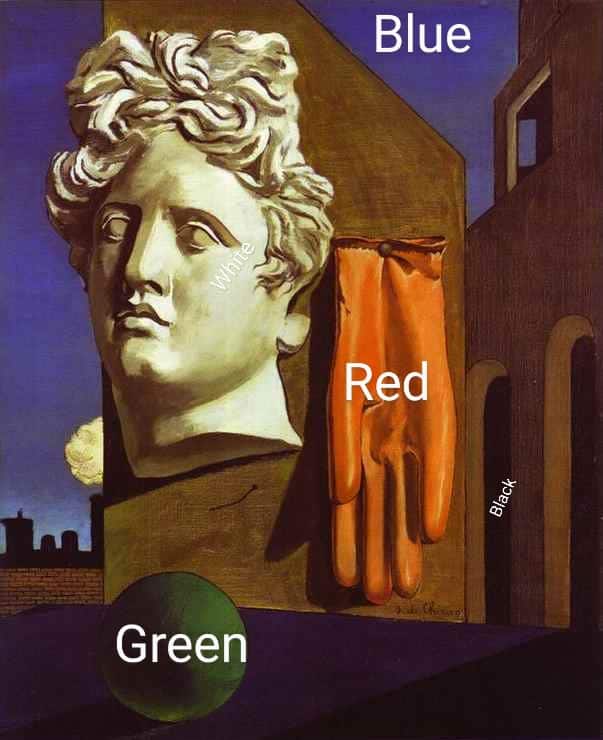 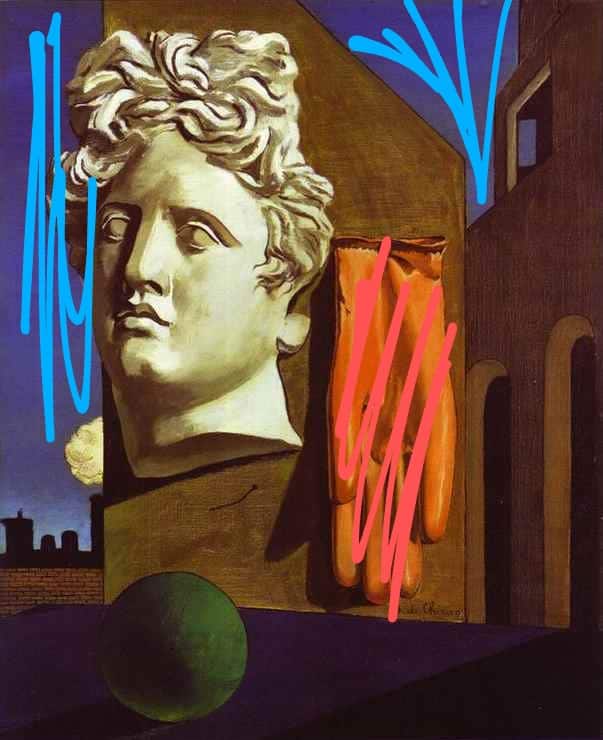 Colors are important also to convey a message and this is true also in photography and cinema. In his famous “the brain of the child” the main theme is the circle of life with an union between father and son. The man in the picture is at the same time De Chirico and his father. The yellow book probably is the famous Those Spoke Zarathustra by Nietzsche (or for another interpretation The adventures of Pinocchio by Collodi); the man could be also Nietzsche. In fact De Chirico usually identified himself with the philosopher. In the circle of life father is directly connected with his son, one dies and the other continues to live. The theory behind this picture is inspired to Nietzsche and Eraclito’s thoughts. In this canvas we can see three primary colors, red, yellow and blue. But also the extremes of light: white that represents life and black for death (circle of life).  This is a perfect example how color is important for the visual impact but also for the message. For more detailed explanations about this canvas I suggest you to read Metaphysical Images by Riccardo Dottori. 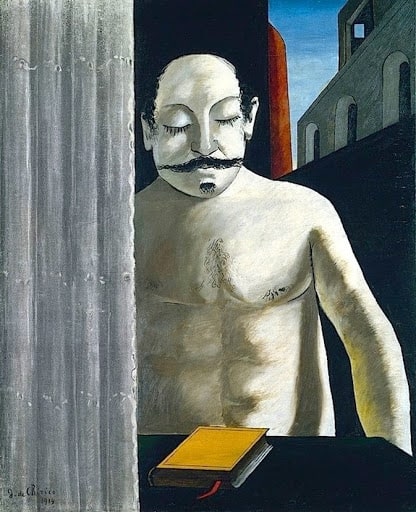 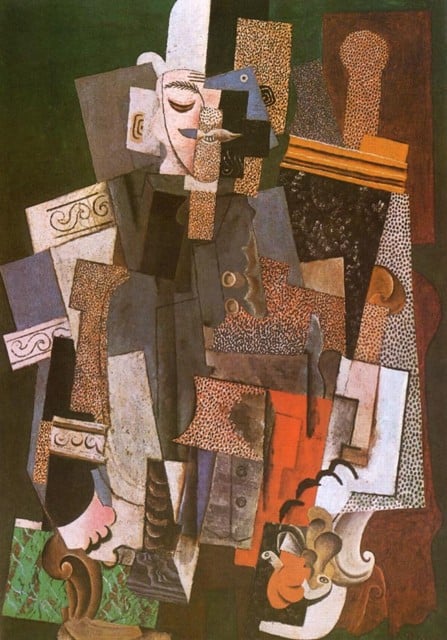 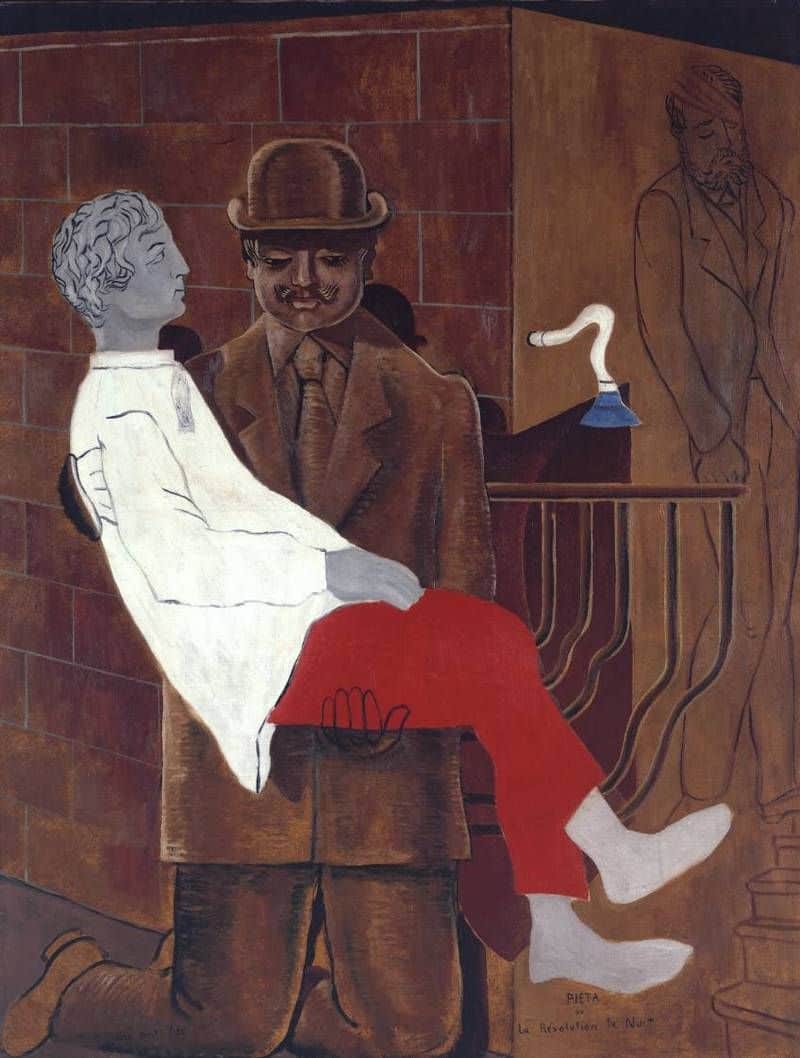 Going back to color photography we can find a lot of examples in street photography and reportage. Thinking to Magnum photographers I have in mind Alex Webb, his photos are characterized by brilliant colors. He usually try to put together cold/hot colors and complementaries like green and red. Next shot was taken in Istanbul, look at the visual impact of this picture.

An example how to put together warm and cold tones in the same frame. The scene is underexposed to saturate colors and to have black silhouettes in shaded areas.

A famous iconic portrait taken by Magnum photographer Steve McCurry. This is Sharbat Gula. Look at the complementaries red/green; they create dynamism and emphasize the drama of the girl. The overall visual impact is really strong. 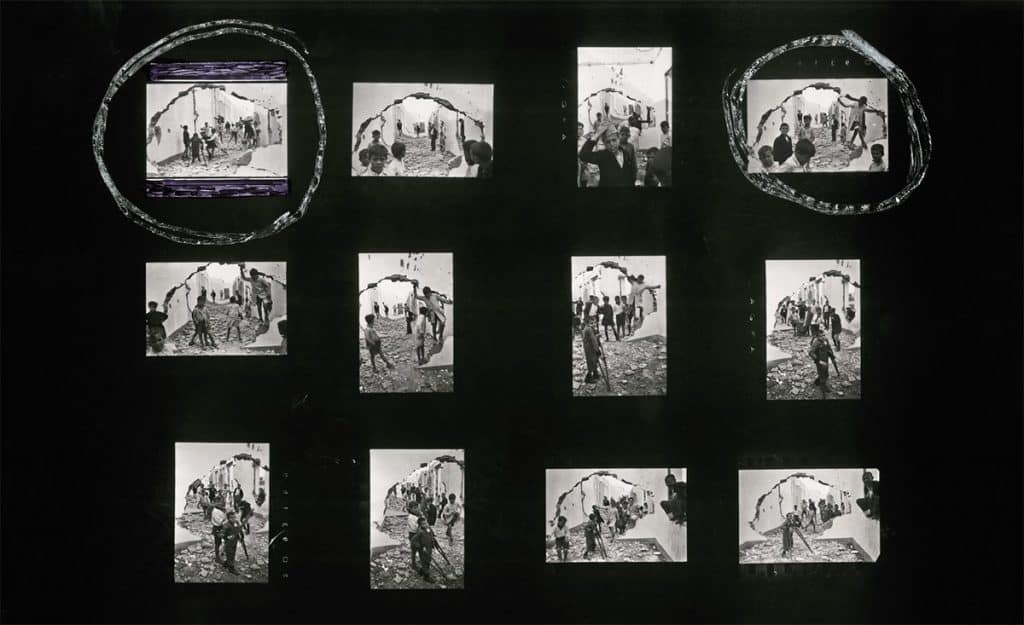