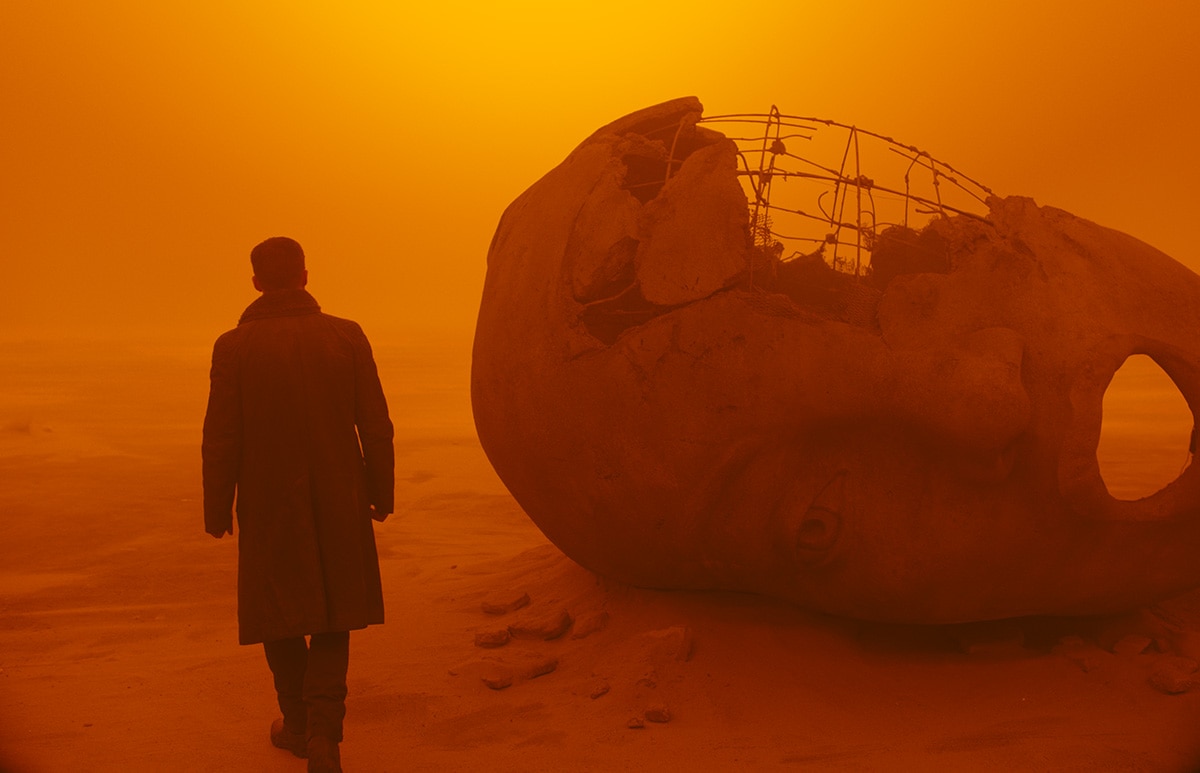 Blade runner 2049 is a wonderful neo-noir sci-fi movie (2018), sequel of Blade Runner, a 1982 cult directed by Ridley Scott, inspired by Philip K. Dick’s beautiful novel. In this second chapter (directed by Denis Villeneuve) Harrison Ford, Ryan Goslin, Sylvia Hoeks and Jared Leto are the main actors. Roger Deakins is the director of photography and won an oscar for it, soundtrack by Hans Zimmer.

Blade Runner 2049 is a wonderful movie, unfortunatly seen by few people in cinema. I’d like talk about story, characters, actors, Villeneuve’s direction, scenography… But in that blog I’ll talk only about one aspect of Blade Runner 2049, his wonderful photography rewarded with the oscar.

The photography of Blade runner 2049: analysis

The photography of this movie, curated by the The DOP Roger Deakins, is characterized by wonderful pano landscapes and cityscapes, minimalism, colors and a great use of lights and shadows. Not by chance Deakins is called The master of ligths, he won an oscar for this movie. Let’s see his work in Blade Runner 2049 analyzing some frames.

The Villeneuve’s sci-fi movie is full of scenes with wonderful minimal landscapes and cityscapes. Compositions of these footage usually respect the classic rule of thirds. This was an innovation compared to first chapter of 1982 directed by Ridley Scott.

The concept behind Blade Runner 2049 is that the planet is seriously damaged; man with modern technologies has damaged the earth. Air is polluted and unbearable, climates have changed, many geographical areas are contaminated by radiation. In this mad future ocean levels have risen dangerously so people have built a wall to protect the city of Los Angeles from an inundation. This is part of the terrible climate changes.

The particular scenography and photography of Blade Runner 2049 try to express the idea of a dangerous and uninhabitable world. Fog appears in many minimal shooting,  giving the idea of a big and forbidding world; characters breathe a cold and unhealthy air.

The DOP Rodger Deakins is a master of lights and shadows. His cinematography is famous for the use of silhouettes and wonderful minimal compositions. I’ve taken some frames from the movie as examples. 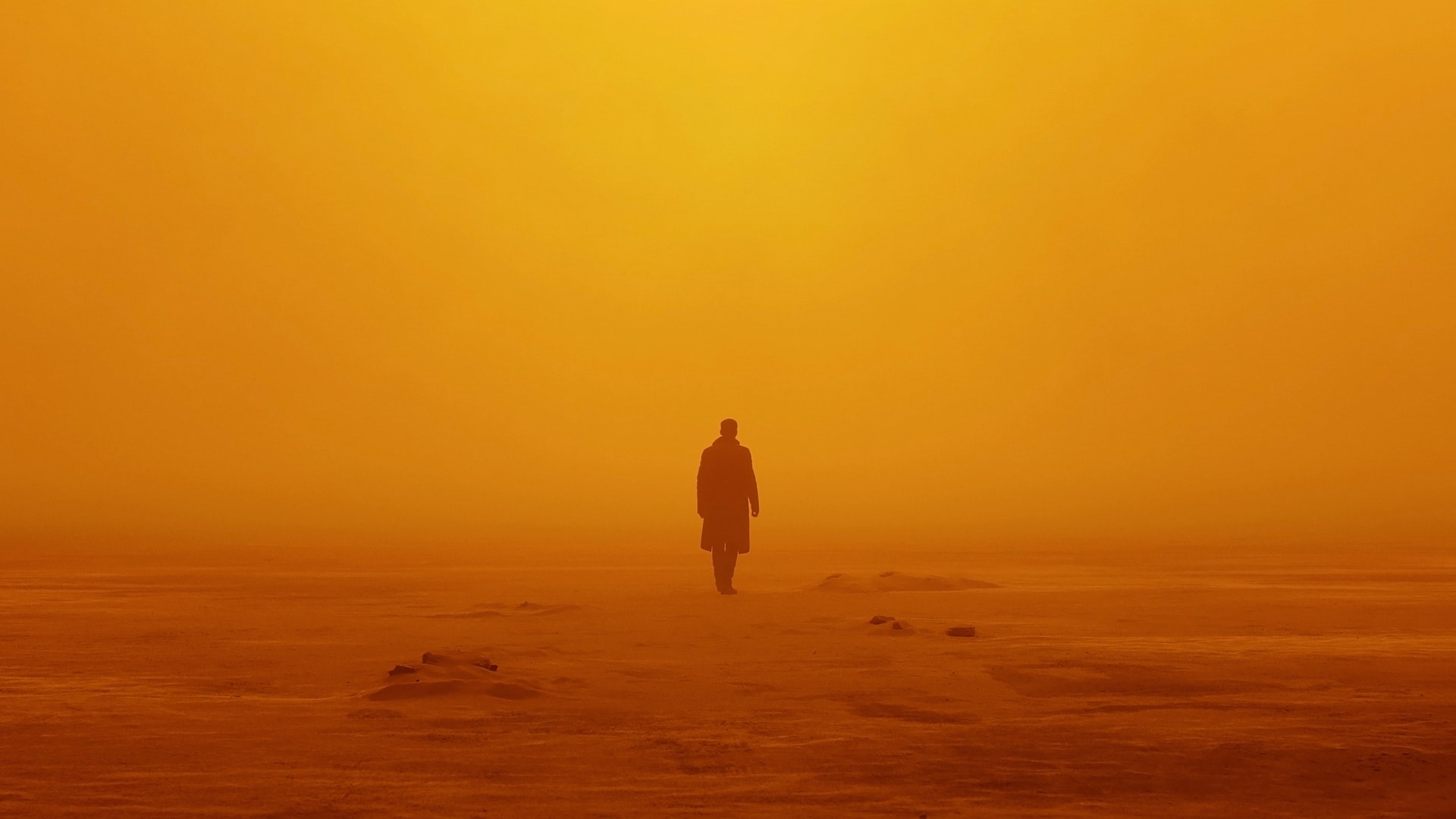 In Blade Runner 2049 there are minimal and panoramic landscapes filmed with wide angle lens. Scenes are composed according to rule of thirds. Watching these frames we have the idea of inhospitable and big places, isolated from the rest of the world. Often main characters are in the centre of the scene as you can see in the images posted here.

The philosophy behind minimal images is that sometimes less is more. These frames seem painting and are aesthetically beautiful. Viewer’s eyes are not distracted by superflous elements, the scene is essential. At the same time in this way Villeneuve and Deakins express the idea of a dangerous and mysterious world. 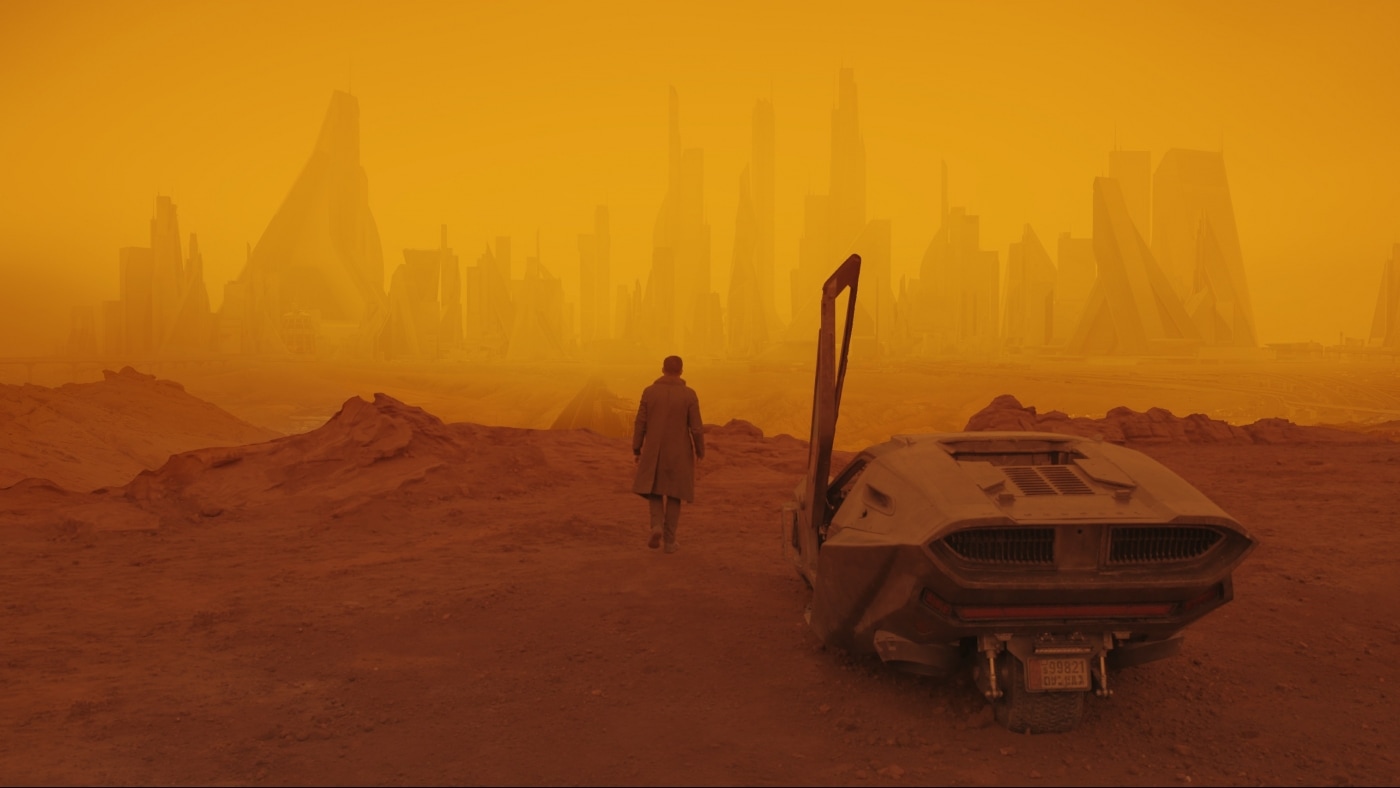 Many landscapes are filmed from an aerial perspective as in the final chapter of the movie where they’ve used an helicopter to make an aerial shot (Iceland).

The following frame represents an endless solar field in California. In this pano landscape full of small details nature is completly dead; the view gives a terrible sense of immensity. There is no light, colors are “dull”.

Looking at Blade Runner 2049’s palette we can find both cold and hot colors. Colors are essential in cinematography for form and contents. Blade Runner 2049 has a particular and wonderful color palette. Let’s see some examples.

Orange is like a man convinced of his powers, that gives an idea of health. Its note is that of the angelus, or of an old violin (The spiritual in art, Wassily Kandinsky).

In a movie orange may express the idea of action, strenght but also exploration and danger.

It is often used for action scenes…

…and for determination, strenght…

Villeneuve and Deakins have used orange (and yellow) to suggest mistery, exploration, but also danger and action. We can find wonderful oranges in the scenes in which K agent (Ryan Goslin) search Philippe Deckard (Harrison Ford) in Las Vegas, a ghost town. These scenes are surreal. The orange-yellow in Las Vegas scenes give the idea of a sandstorm in the desert. 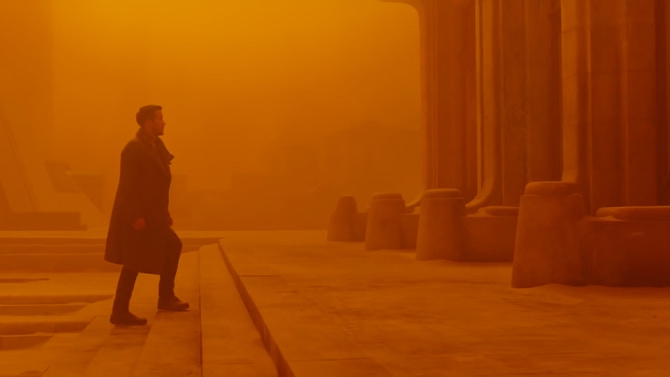 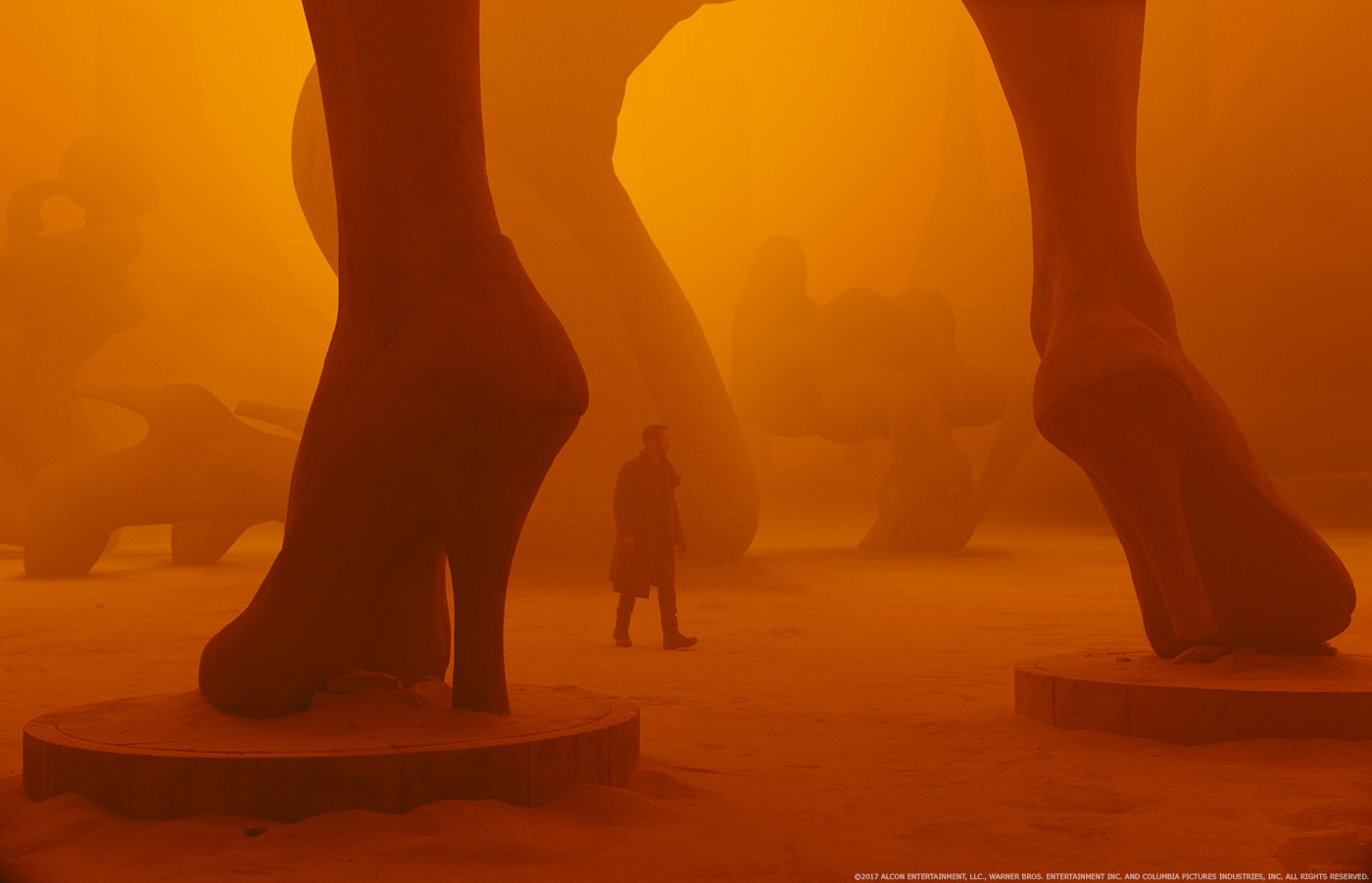 White is another important component of Blade Runner 2049 palette. White is used in minimal frames, it evokes the idea of solitude, silence and death. In this movie it is used for abandoned places and spectral landscapes hidden by fog. Sometimes white gives the idea of suspended places out of space and time, like a limbo. 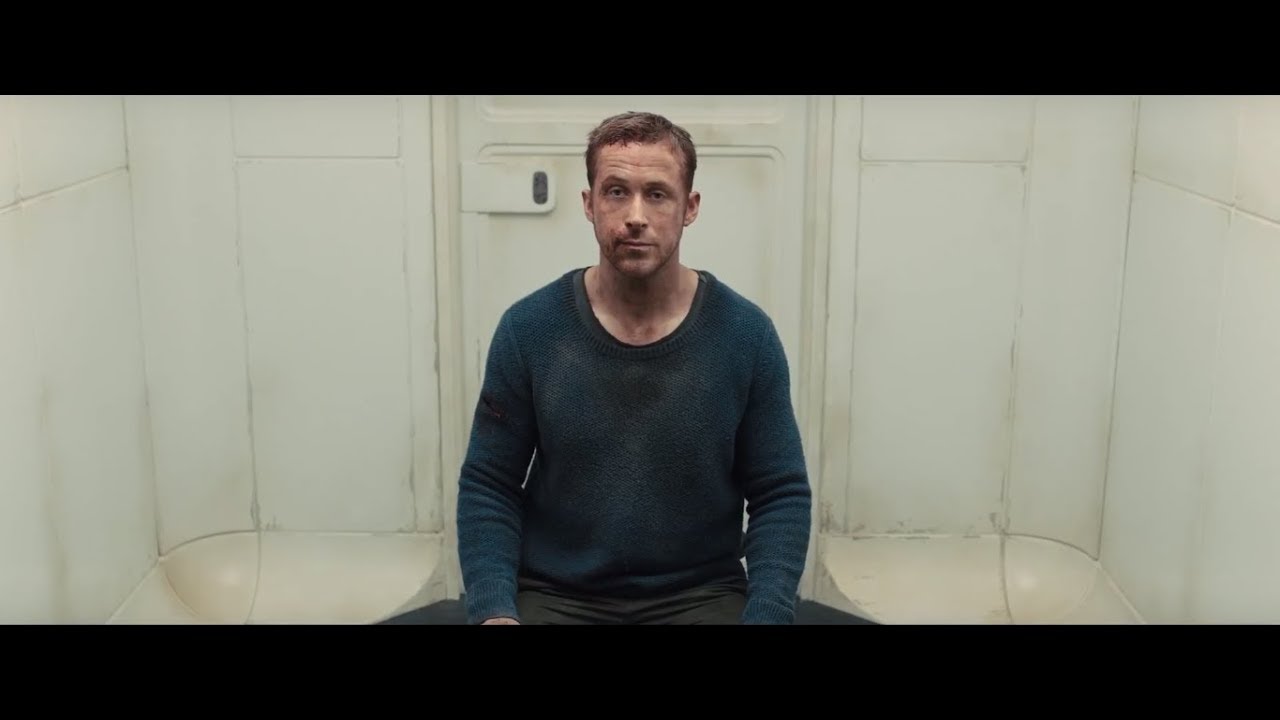 In the year 2049 the world is polluted and sick by human tecnology. The grey is the main tone of this distopic dead future. Sometimes in different scenes of the movie grey is tinged by other colors as blue and white to give the idea of a lifeless world. The photography becomes darker. 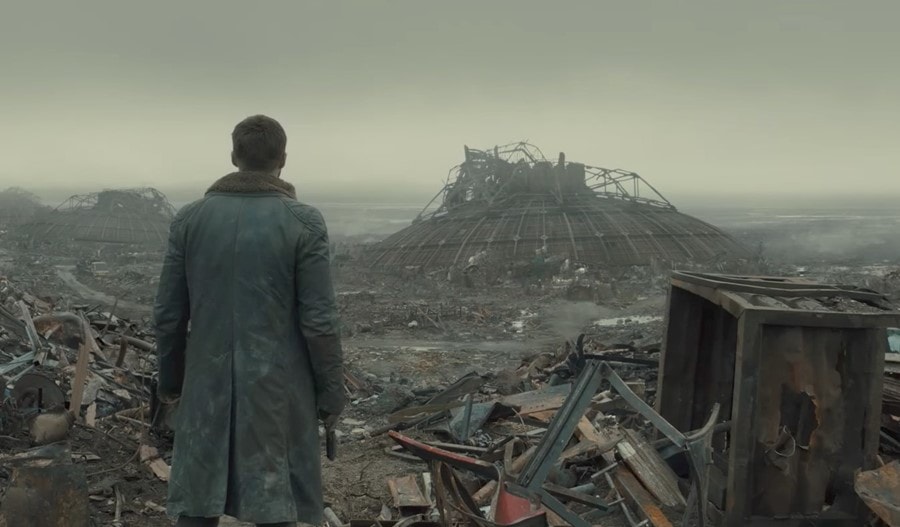 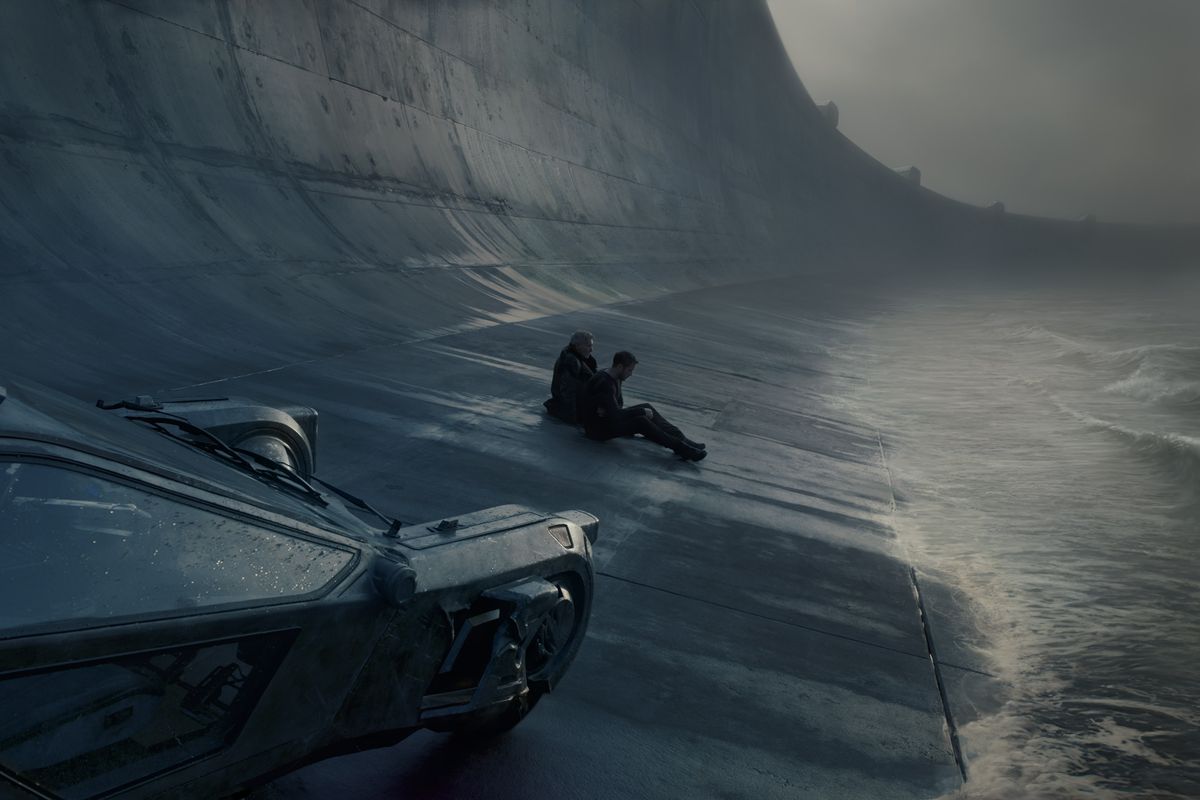 Usually in sci-fi movie blue and purple are the colors of future and technology (let’s see for example movie as Avatar by James Cameron). This palette is used in LA cityscapes. The city is illuminated by neon lights and giant holograms. 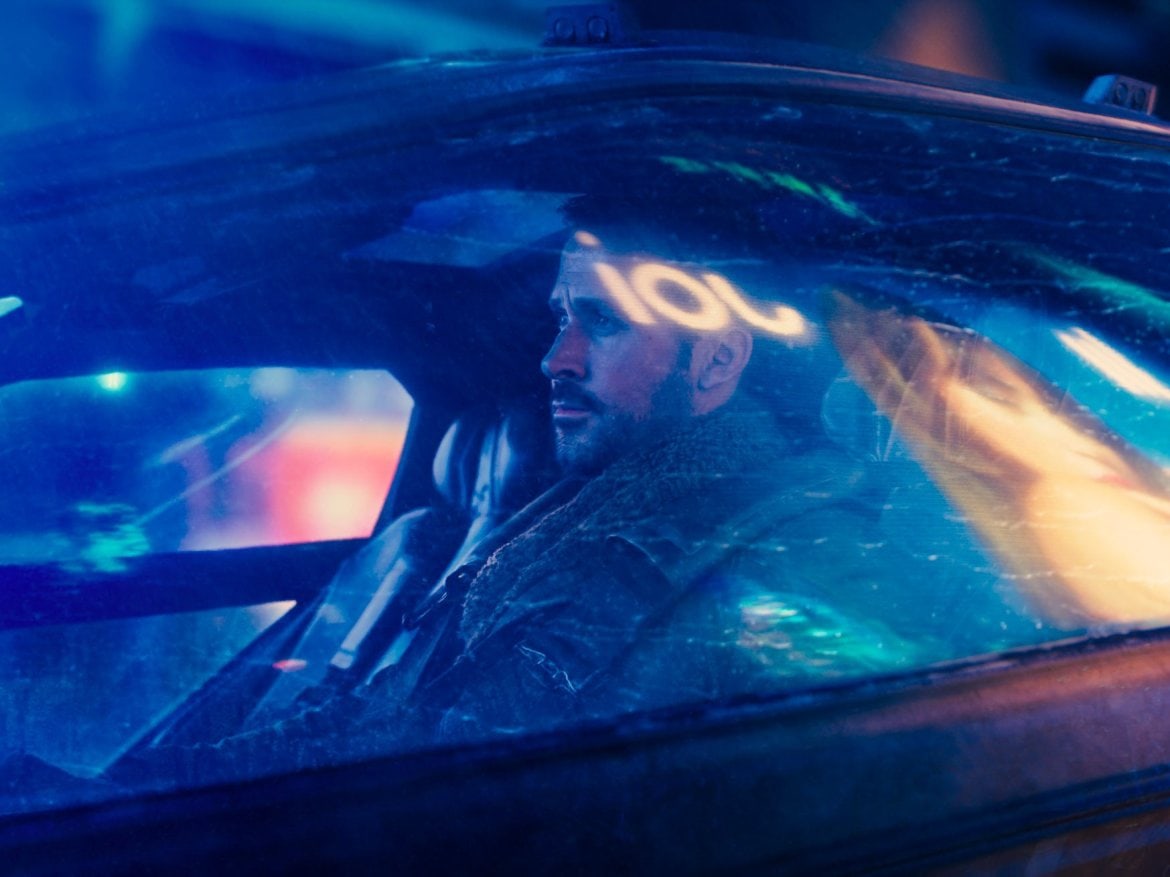 Rodger Deakins is the great DOP awarded with the Oscar for cinematography in Blade Runner 2049. We’ve just talked about his photography in the previous paragraphs of this blog. We’ve analyzed compositions, minimalism, colors palette, silhouettes. In blade runner 2049 there are lights but also darkness, especially in L.A. districts. Deakins created a beautiful contrast between dark tones and neon/holograms cold lights. 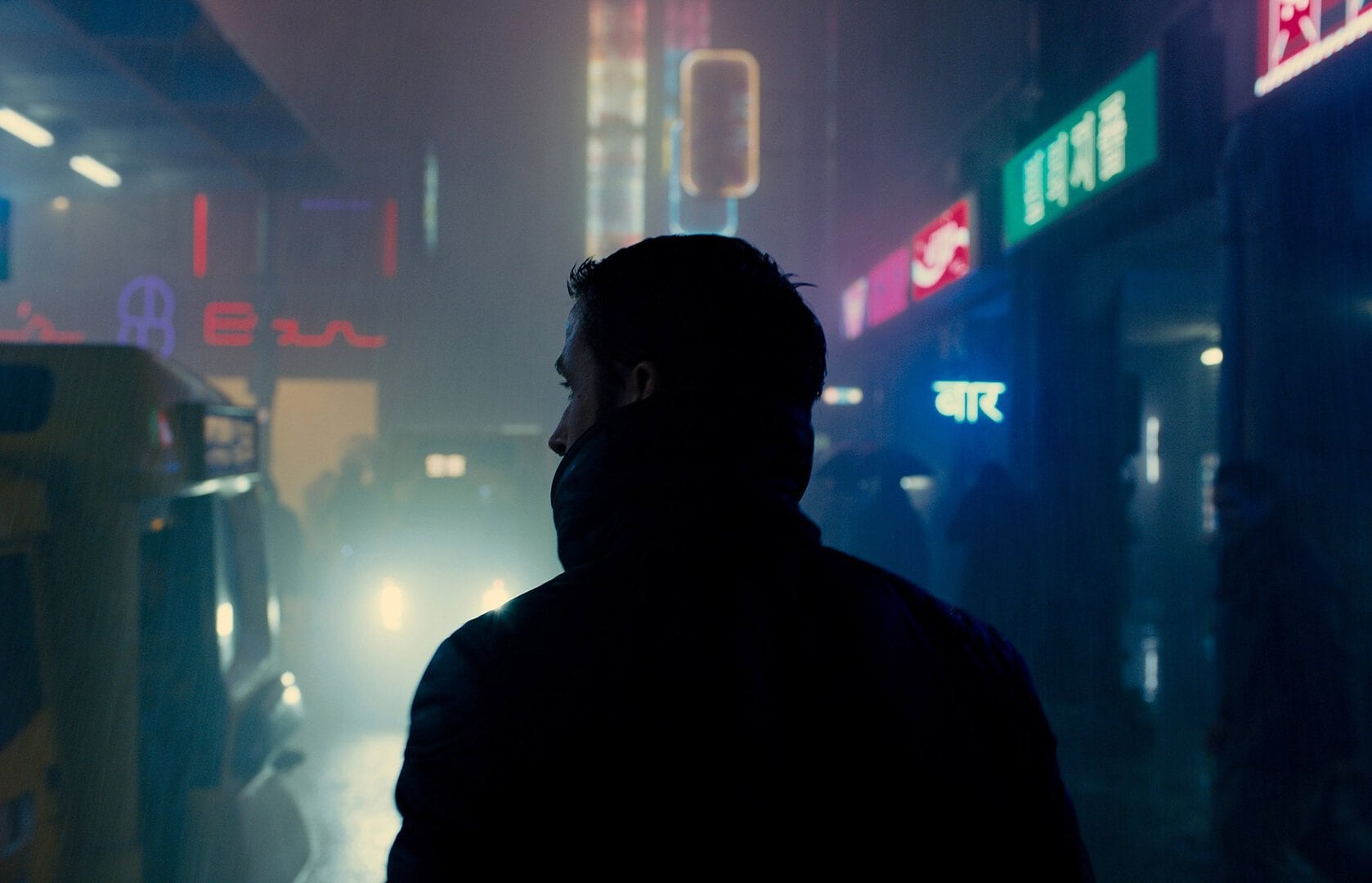 For the scene in Wallace’s office Rodger Deakins used a circular apparatus with 286 moving lights mounted in two concentric rings. The incandescent lights create a dynamic lighting game in the scene with also shadows and silhouettes. The Oscar Jared Leto plays the role of Wallace, the bad guy of the story. 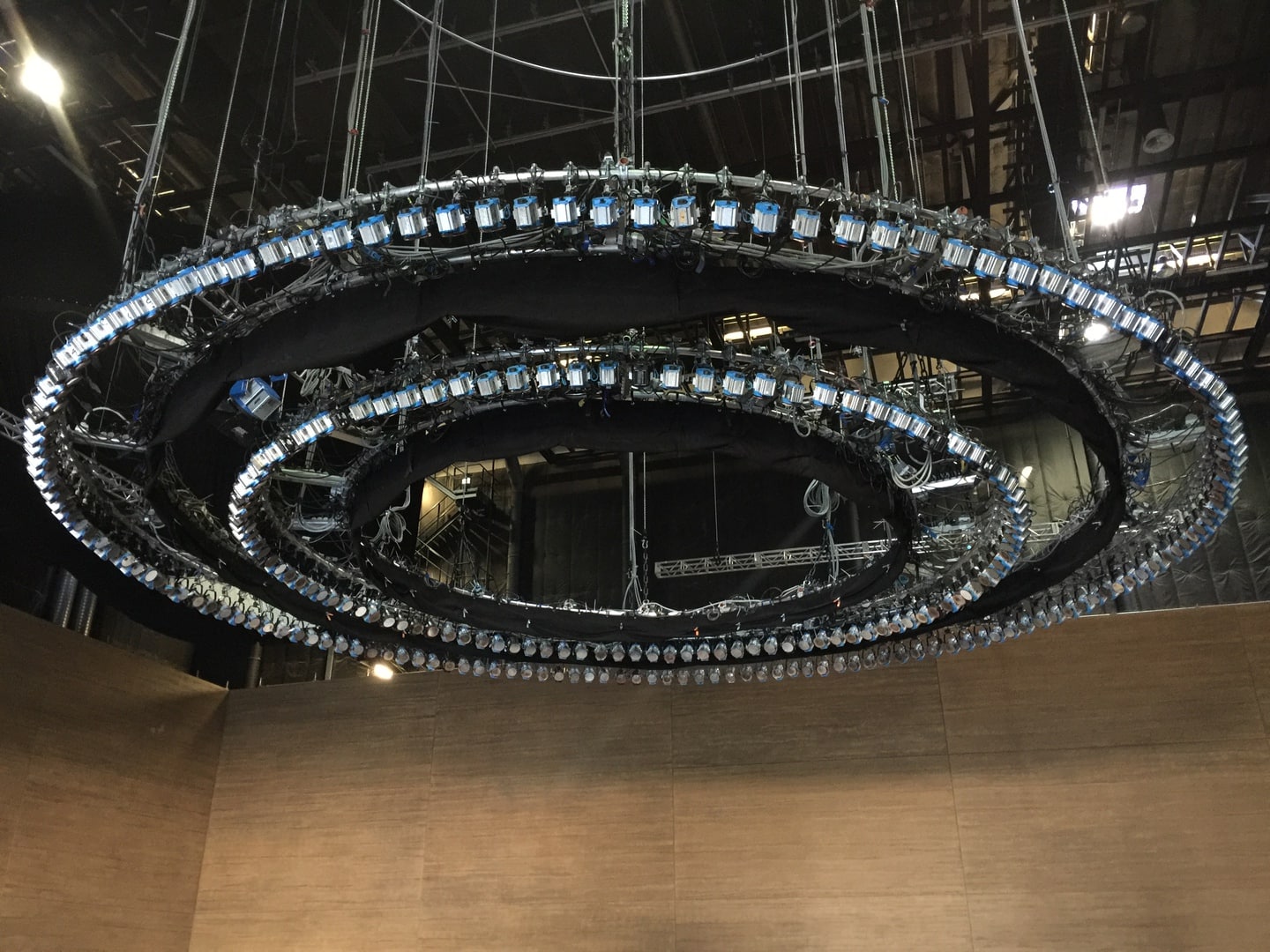 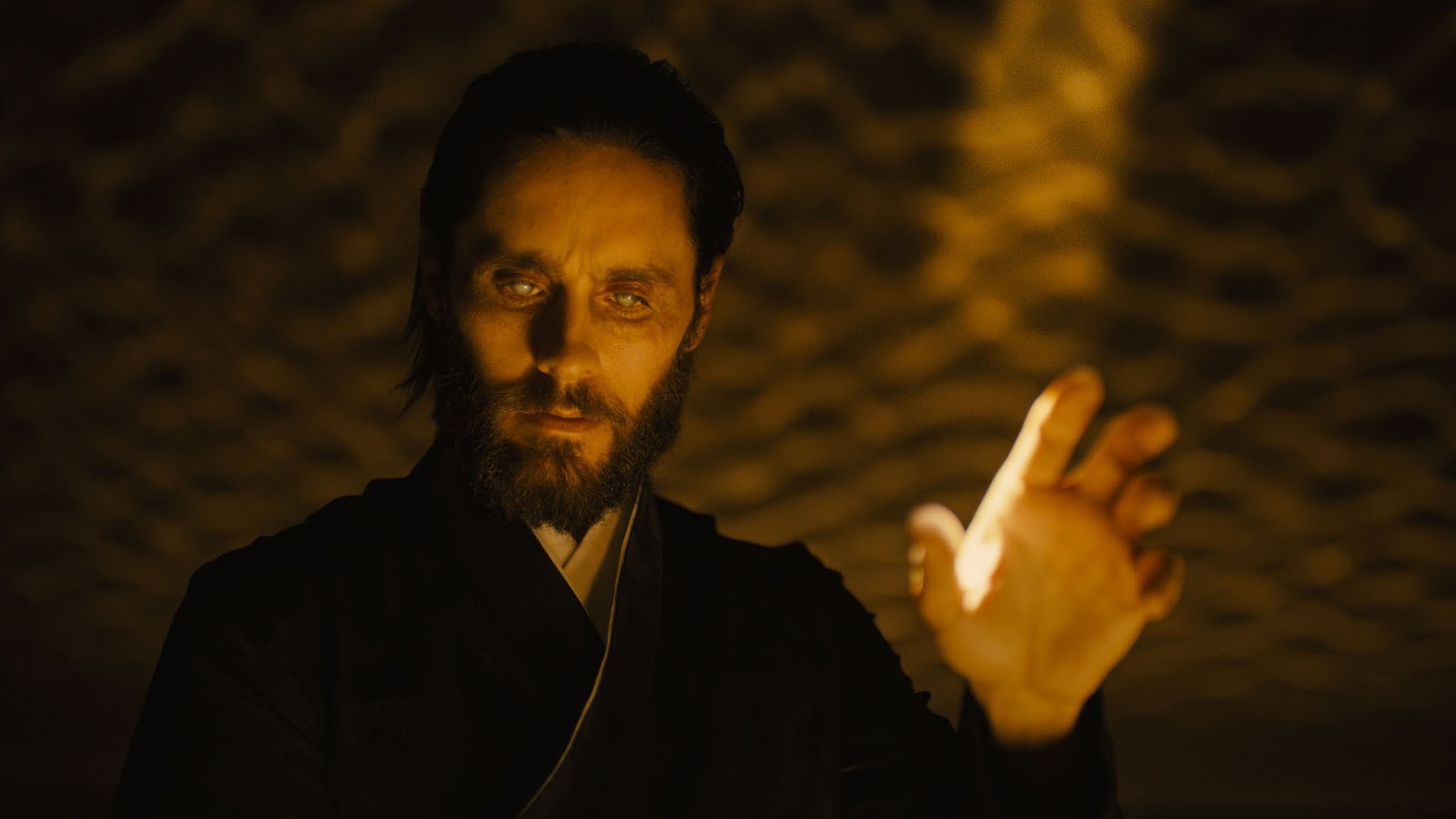 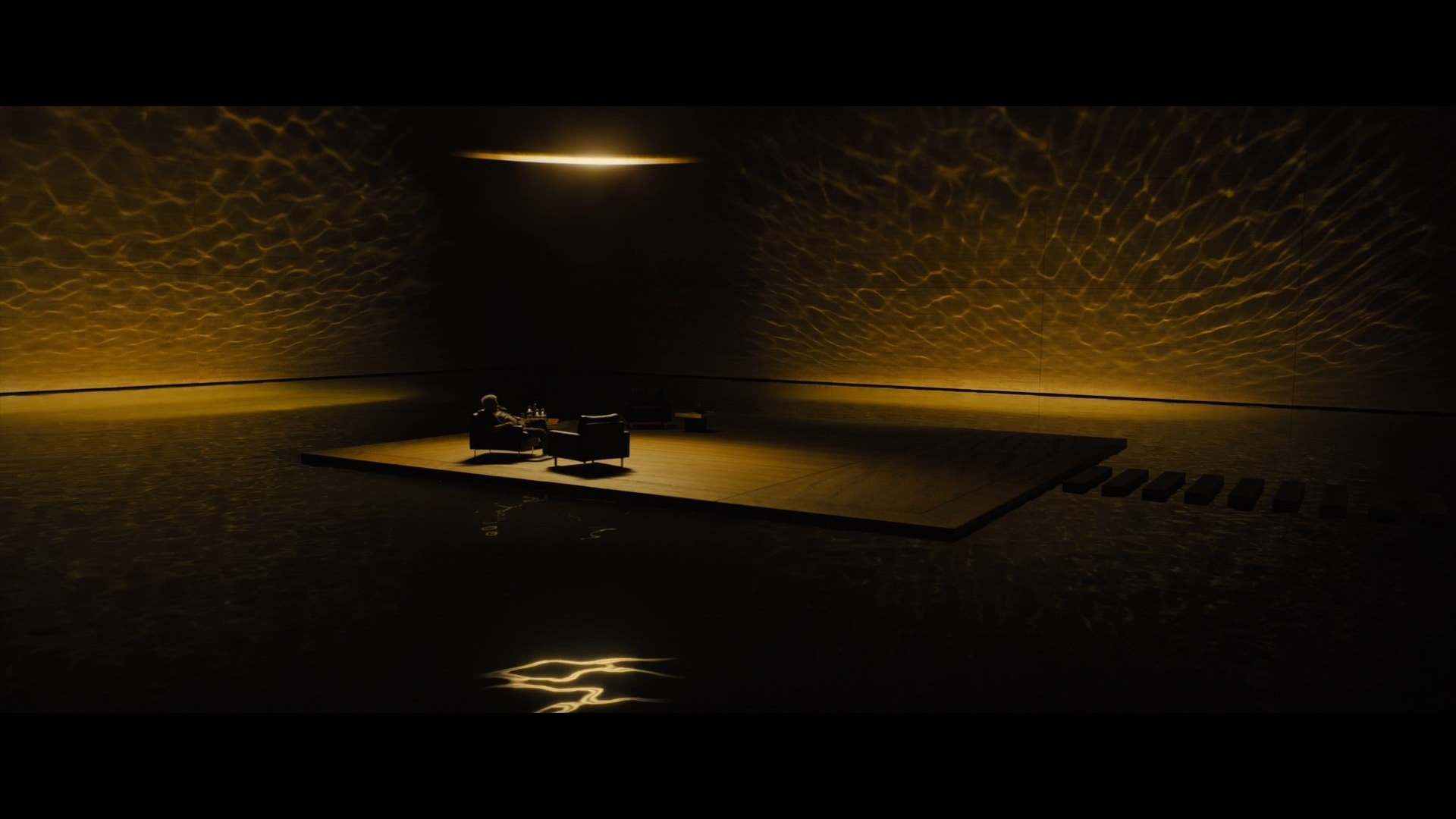 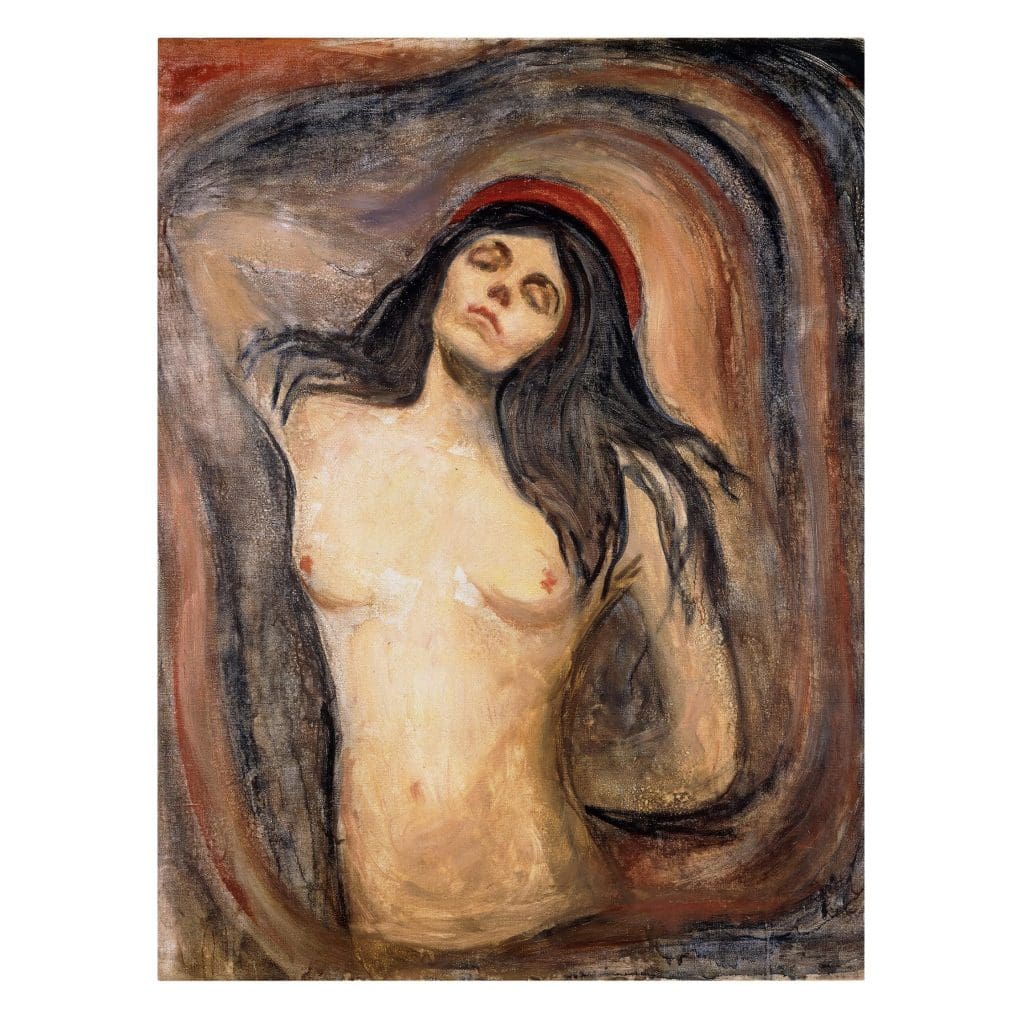 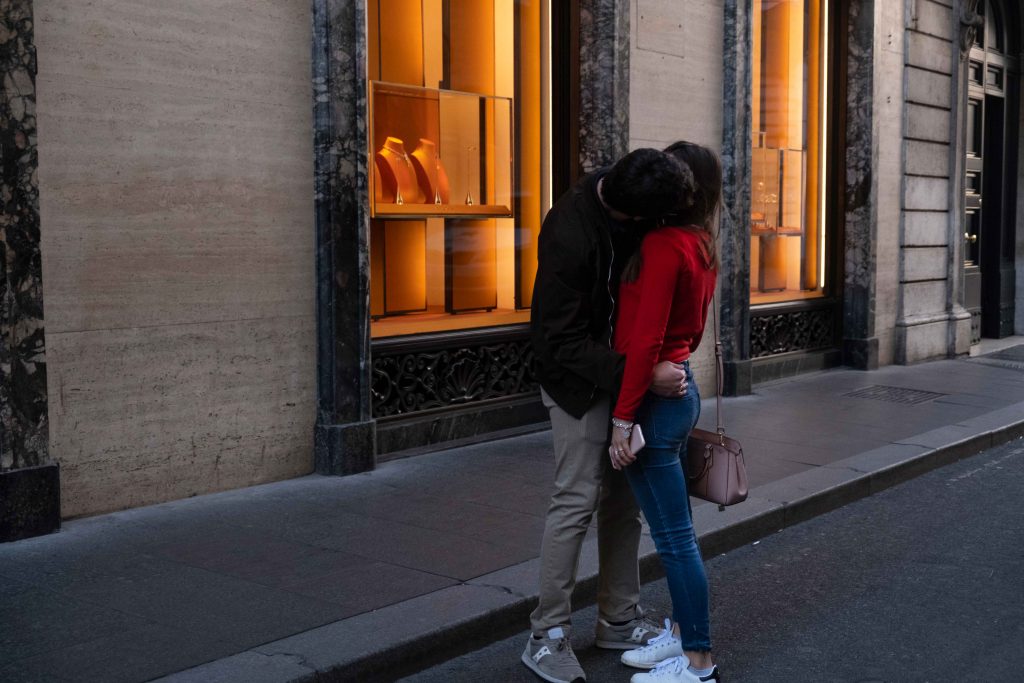